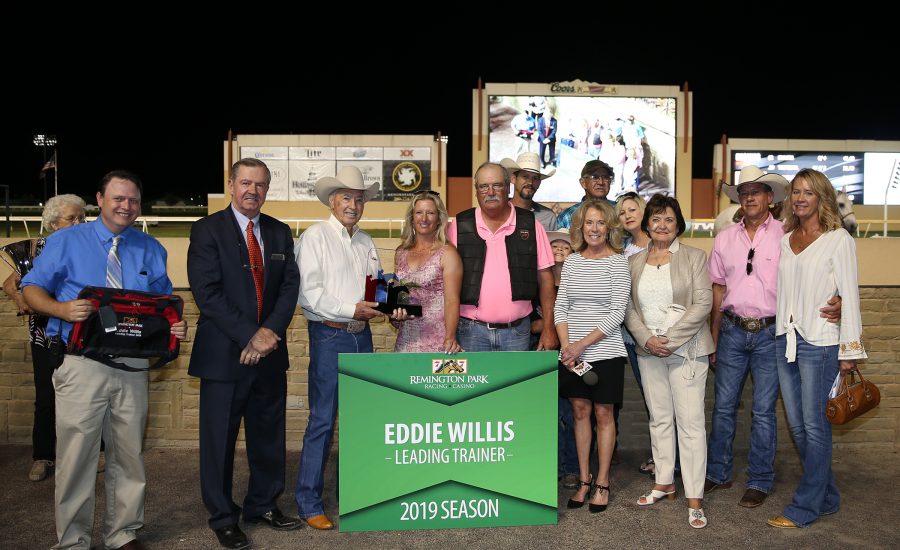 It’s been a long five years since that last seasonal championship, but on Saturday night, Willis won another to tie him with the late Rodney Reed for the most sprint titles by a trainer lifetime with 10. Willis’ other training championships came from 2004-2007. Reed was the top conditioner at Remington Park in 1990 and 1995-2003.

“I appreciate it a lot,” said Willis, who hails from Caney, Okla., when told he had held on for the win. “Everything went pretty good all year. That’s what happens when you work hard, I guess.”

In winning the seasonal title, Willis won the Jack Brooks Award, given to the leading Remington Park trainer. Named after the legendary Hall of Fame Trainer, Brooks was on hand to present the trophy to Willis.

Willis finished the 51-day race meet in Oklahoma City with 36 wins, just eking out the victory over runners-up Clint Crawford and Rick Robinson, who had 35 apiece. Robinson made a run at Willis on the final weekend, winning with two horses on Friday night and two more Saturday, closing night. Willis was shut out those two days.

On the final night of the meet, Willis entered 11 horses in six races, Robinson eight in six races, and Crawford seven in four. It was one of the most exciting finishes in track history.

The top five in the final trainer standings were:

In the jockeys’ race, James Flores won his second title in a row, winning 52 times this meet. He had 43 wins as the champ last year. The final five jockeys in this year’s standings and their horses’ earnings were:

With his win in the Grade 1, $963,100 Heritage Place Futurity aboard Uptowne Babe, jockey Rolando Raudales zoomed up the leader board among riders in the money standings, with his mounts bringing home $1,035,182 for the meet, good enough for second among that group.

The top owner in one of the tightest races ever at Remington Park was James Sills. There were only two wins difference from first to ninth in that race. Sills, of Cedar Hill, Texas, finished with nine victories for the meet and the rest were lumped up like cold oatmeal. Here are the top owners and their horses’ earnings:

The leading owner according to money earned was the winner of the Heritage Place Futurity, Sam W. Green, of Monett, Mo., who finished with $518,467.

Remington Park is always open for casino gaming. Simulcast horse racing is offered daily. Admission, parking and valet parking are always free at Remington Park. Guests must be 18 or older in order to wager on horse racing or to enter the casino.

••••••
Tracked by more than 154,000 fans on Facebook and more than 9,900 Twitter followers, Remington Park has provided more than $218 Million to the State of Oklahoma general education fund since the opening of the casino in 2005. The track is located at the junction of Interstates 35 & 44, in the heart of the Oklahoma City Adventure District. For more information, reservations and group bookings please call 405-424-1000, 866-456-9880 or visit remingtonpark.com.

July 31, 2021 – We appreciate you choosing to participate in OQHRA’s races

We appreciate you choosing to participate in OQHRA’s races and making your payment on or before the 15th.

Recurring payments will be automatically deducted on the 15th of each month. If you need to drop your horse from the race or stop the automatic deduction notify OQHRA in writing 5 days prior to the payment due date.

If you have any questions regarding the races, payments or Oklahoma racing in general, please do not hesitate to call our office. If you see an error in horse name, ownership, etc. please let us know right away so we can get it corrected before the next payment.

This nomination list is the only reminder you will receive about upcoming payments.

Sustaining payments MUST be postmarked by August 15, 2021.

Would you like money to help with your college tuition? OQHRA has a scholarship for youth that want to have a career in the horse industry. Applications are due Oct. 1st. Follow the link to fill out the online application or print it out and mail it in.

Please pass this along to someone you might know that is working towards a career in the horse industry.

It's now restricted to members??