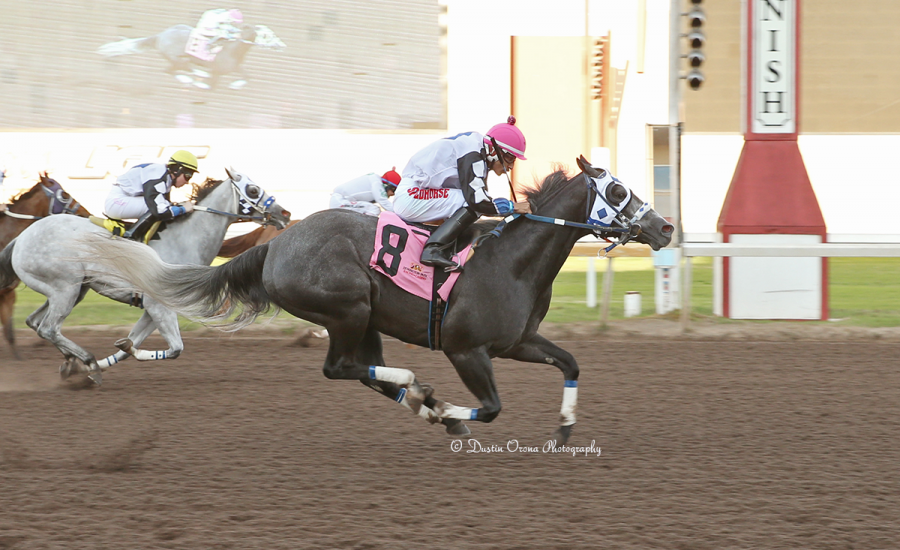 OKLAHOMA CITY, OK – May 3, 2021 – Trainer Clint Crawford’s barn was red hot Sunday night at Remington Park, making four trips to the winner’s circle, including after the featured allowance race with Jess Good Enough. The four wins put him into a tie for first place in the trainers’ standings with defending champion Eddie Willis.

Jess Good Enough got the ball rolling, winning the third race, a $28,250 allowance race for 3-year-old quarter horses that had not won three races lifetime. It would be the first victory of a training quadruple for Crawford. He also took the fourth race with Fly Viking Fly ($5.60 to win) and the seventh with Mr Amstel ($9), and the nightcap 10th race with Heavven Lee ($7.40).

Jess Good Enough captured the third win of his career in the allowance race, earning $15,588 from the purse. The gray, gelded son of Jess Good Candy, from the Oak Tree Special mare Fly On Candy Tree, broke his maiden at Remington Park in his second career try at 300 yards, beating Oklahoma-breds on April 30, 2020. He didn’t win again until his last out at Remington Park on a sloppy track against an allowance, non-winners of two, field almost a year later, on April 16 here. He seems to have figured it out as he has now won two in a row. Jess Good Enough improved his career mark to nine starts, three wins and two places for a total of $53,434.

The winner’s running time for Sunday’s 350-yard race was :17.931 over a fast track, earning him a 79 speed index. He broke third from the gate and quickly went to the lead after 100 yards. He continued to widen the margin with each step. Jess Good Enough, the 2-1 favorite, was a half-length in front of runner-up O Donovan Rossa (6-1). Finishing third another half-length behind was Coronada Queen (19-1). Jess Good Enough paid $6, $3.60 and $2.60 to win, place and show.

Crawford was the fortunate heir of the favorite’s misfortune of breaking in the air in the seventh race. MM Painted Twister, the 7-5 betting favorite, reared up high as the starter hit the button to begin the race, and the horse never came out of the gate. That left Mr Amstel with a clear path to victory as he won by a half-length.

Jess Good Enough is owned by Diamond Oaks Racing of Garland, Texas. He was bred in Oklahoma by Lifes Good Racing Partners.

When Crawford won the final race of the night, he tied Willis, who was shut out on Sunday. They each have 29 wins for the meet, 16 ahead of third-place Monty Arrossa. Dee Keener is alone in fourth with 12, one behind Arrossa and tied for fifth are Trey Wood, Carlos Ruiz, Gerald Reed and Matt Whitekiller with 11 each.

Three jockeys had a pair of wins apiece – Josh Romero, Jorge Torres and Daniel Amaya – on Sunday, moving Torres into sole possession of third place in the jockeys’ standings with 21 wins. Juan Pulido leads the colony this meet with 31 wins and Francisco Calderon is second with 29. Rounding out the top five are Jimmy Brooks in fourth (19) and James Flores (18). Torres won on the first two Crawford winners (Jess Good Enough and Fly Viking Fly) Sunday and Amaya won the final two (Mr Amstel and Heavven Lee) for the trainer.

Live racing continues next week with a Thursday-Sunday schedule, May 6-9, with the first post nightly at 6pm-Central.

Tracked by more than 165,000 fans on Facebook and 10,400 Twitter followers, Remington Park has provided more than $260 Million to the State of Oklahoma general education fund since the opening of the casino in 2005. Located at the junction of Interstates 35 & 44, in the heart of the Oklahoma City Adventure District, Remington Park is home to the $1 million Heritage Place Futurity on May 29. Visit remingtonpark.com for more information.

OKLAHOMA CITY – When 2023 racing begins at Remington Park, it will start with new guidance in the racing department. Kelly Cathey has accepted the director of racing position and will oversee the operation for all breeds competing at the Oklahoma City facility.

The American Quarter Horse, Paint and Appaloosa Season will begin March 9. The 2023 Thoroughbred Season will get underway in late August.

Cathey brings more than 30 years of experience in horse racing to Remington Park. He first worked with horses in the late 1980s as a teenager, assisting his father who was a trainer. He has also served as a groom, pony person, assistant trainer, valet and assistant starter.

Cathey moved into track management in 1998 at Retama Park in Selma, Texas. He has also worked for Lone Star Park in Grand Prairie, Texas; Sam Houston Race Park in Houston and Will Rogers Downs in Claremore, Okla. He has held nearly every position associated with racing, pari-mutuel wagering and simulcast operations throughout his career.

Since 2013 Cathey has worked for the Oklahoma Horse Racing Commission as a state steward (2013-2015), advancing to the role of executive director of the commission in 2015. He will leave that post to become the director of racing at Remington Park.

“Remington Park and Global Gaming are excited to have Kelly Cathey join our racing team,” said Matt Vance, executive vice president of racing operations at Remington Park. “Kelly has a resume reflective of more than 30 years in the sport, working as a racing executive and regulator. His extensive experience with both Thoroughbreds and Quarter Horses and their respective organizations throughout the region makes him uniquely qualified to lead our racing department at Remington Park.”

Horsemen will bring horses onto the grounds at Remington Park beginning Feb. 6 with the initial morning of training set for Tuesday, Feb. 7. The first night of the spring season falls on Thursday, March 9 and the 50-date schedule continues through Saturday, June 3. ... ’Expand’See Less

It continues to be the goal of Remington Park and OQHRA to provide a race meeting of the highest quality and integrity. As a condition of entry, no horse will be allowed to enter a race at Remington Park unless results of a negative hair test have been provided to Remington Park prior to entry. All pre-entry hair testing will be facilitated by OQHRA. Pre-entry hair tests will be good for 90 days beginning the day after the sample is collected. All tests will expire after 90 days and horses must re-test to remain eligible, regardless of if the horse started in a race within those 90 days. In no event will a horse be eligible to enter a race unless a current negative hair test is on file at Remington Park in accordance with the conditions set forth in the condition book. The Remington Park Racing Office nor OQHRA staff receive the results of hair testing. All test results submitted to Remington Park management will remain confidential. Any horse receiving a positive hair test will be unable to enter until a negative test is obtained, there is no penalty to the trainer.

To better serve horsemen, OQHRA will be setting up offsite testing days at Retama Park, Lone Star Park and Blue Ribbon Downs. The OQHRA testing crew will be available at each location one day, allowing horsemen the opportunity to get horses tested closer to where they are stabled/training. Horses needing to be tested in other states do have the opportunity to have an offsite test done by a state veterinarian working under the auspices of a State Regulatory Agency.

𝗥𝗲𝗺𝗶𝗻𝗴𝘁𝗼𝗻 𝗣𝗮𝗿𝗸 – 𝗙𝗲𝗯𝗿𝘂𝗮𝗿𝘆 𝟴𝘁𝗵 𝗳𝗶𝗿𝘀𝘁 𝗱𝗮𝘆.
Onsite testing during February will be conducted 9:00 – noon, Monday through Friday beginning Wednesday, February 8th. There will be no Hair Testing on Tuesday, February 14th or Friday, February 24th. Tests done in February will expire before the end of the meet. Please review the schedule and test/safe dates posted on OQHRA.com and plan accordingly. Onsite test cost $225.