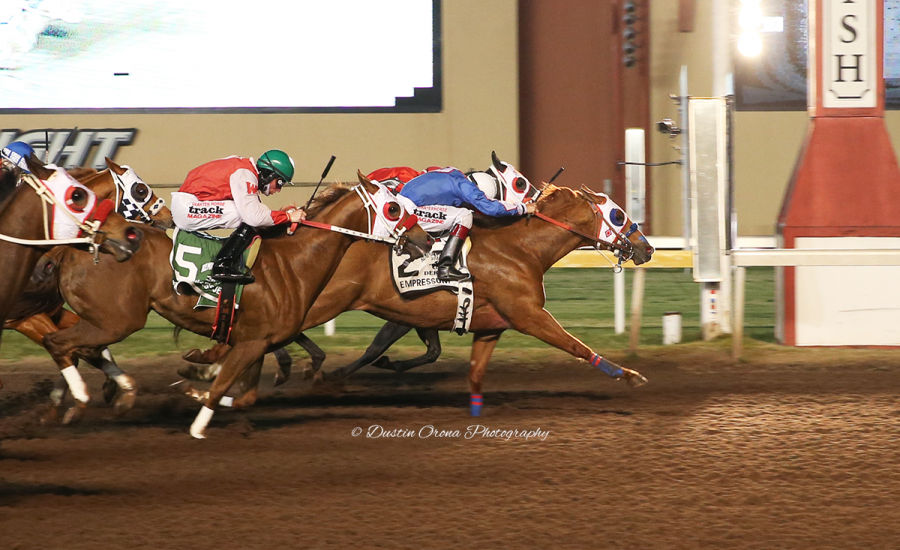 Owned by the Guthrie, Okla. Partnership of Jeff Jones and Steve Holt, Empressum had to overcome a poor start, contact from rivals on both sides and then move between those same rivals to contend before getting victory.

“He showed a tremendous amount of heart and determination after what happened out of the gate,” noted winning trainer Heath Taylor. “Rodrigo (Vallejo, jockey) told me he had to split horses in tight to pass those two (Candy Blood, No. 1 and B Cause Im a Hero, No. 3). That tells you something about our horse right there.”

A gelding by Apollitical Jess from the First Down Dash mare Crazy Down Corona, Empressum was fifth just before the halfway point of the derby. Vallejo continued to hand-ride his mount into a slight opening before going to work once they found more room. HR Princess Jess led out of the gate but could not sustain that effort for the entire measure. Candy Blood, who made early contact with Empressum, was very game but didn’t have enough late to hold off the winner.

This was the first Remington Park Derby win for owners Jones and Holt, also for jockey Vallejo. Empressum provided the second win in the race for Taylor who saddled First Carolina to victory in 2007.

Now a winner of two consecutive races, Empressum may not be finished with what has turned out to be a solid spring at Remington Park, according to Taylor.

“There are some stakes at the end of the meet we might run him in here but he’s also paid into some Texas races too. We’ll let the horse tell us what to do after we see how he came out of this.”

Remington Park racing continues on Sunday, April 18, with the first of 11 events at 6pm-Central.

Tracked by more than 165,000 fans on Facebook and 10,400 Twitter followers, Remington Park has provided more than $260 Million to the State of Oklahoma general education fund since the opening of the casino in 2005. Located at the junction of Interstates 35 & 44, in the heart of the Oklahoma City Adventure District, Remington Park is home to the $1 million Heritage Place Futurity on May 29. Visit remingtonpark.com for more information.

We appreciate you choosing to participate in our races and everyone making their payment on or before the 15th of the month.

Recurring payments will be automatically deducted on the 15th of each month. If you need to drop your horse from the race or stop the automatic deduction, notify OQHRA in writing 5 days prior to the payment due date. The recurring credit card form is included with this nomination list.

If you have any questions regarding the races, payments, or Oklahoma racing in general, please do not hesitate to call our office. If you see an error in horse name, ownership, etc. let OQHRA know so it can be corrected prior to the next payment.

Any condition books yet?

The Remington Park Tattooer will be Josh VanOort. He will be at the track on FRIDAYS. He will begin on Friday, Feb 10th. Call the racing office (405) 425-3271 to sign up. He will go the barns for horses on grounds/ haul ins in C1. ... ’Expand’See Less