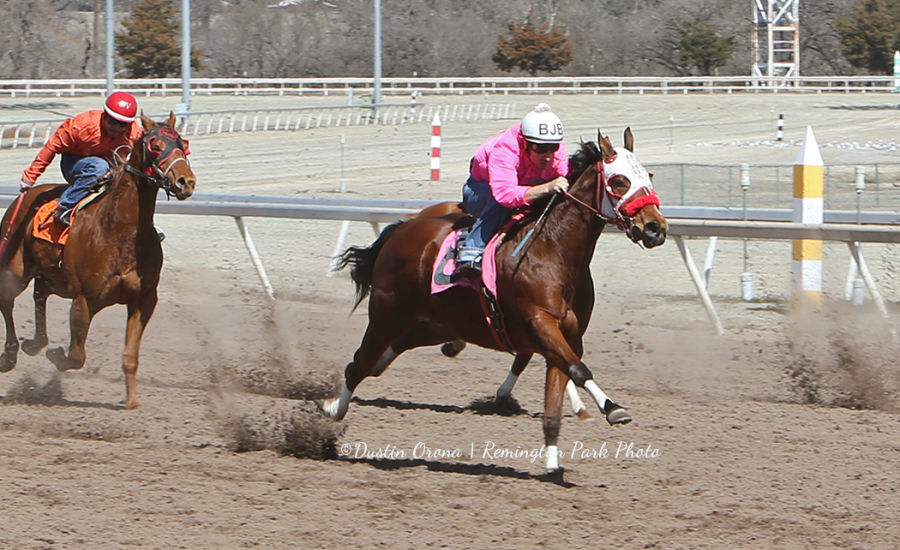 Thursday’s training races were conducted over a fast track under sunny skies with temperatures low 60s, aided by a northerly tailwinds between 16-19mph.

It was the second day in a row Willis was able to win twice in a short number of races. Party Fare, a 2-year-old owned by Bella Vista Farms of Arcola, Ill., was the quickest of all juvenile horses that raced during schooling events. Party Fare stopped the timer in :13.522 for a speed index of 80 to win by 1-1/4 lengths in a field of seven competitors. Jockey Bernard Baca was aboard for the win.

Willis’ other winner on the day was Classy N Graceful in the fourth race, also owned by Bella Vista Farms. That juvenile Quarter Horse stopped the timer in :13.695 for a 73 speed index.

The sixth and final race of the session actually produced the fastest time of the day in an event for 3-year-olds and older. Executivedashcartel crossed the finish in :13.337 for an 87 speed index, trained by Urban Eck and owned by Kurt G. Eck.

Tracked by more than 162,000 fans on Facebook and more than 10,100 Twitter followers, Remington Park has provided more than $242 Million to the State of Oklahoma general education fund since the opening of the casino in 2005. Located at the junction of Interstates 35 & 44, in the heart of the Oklahoma City Adventure District, Remington Park will host the 2020 American Quarter Horse, Paint and Appaloosa Season from March 6 through May 30. For more information, reservations and group bookings please call 405-424-1000, 866-456-9880 or visit remingtonpark.com.

July 31, 2021 – We appreciate you choosing to participate in OQHRA’s races

We appreciate you choosing to participate in OQHRA’s races and making your payment on or before the 15th.

Recurring payments will be automatically deducted on the 15th of each month. If you need to drop your horse from the race or stop the automatic deduction notify OQHRA in writing 5 days prior to the payment due date.

If you have any questions regarding the races, payments or Oklahoma racing in general, please do not hesitate to call our office. If you see an error in horse name, ownership, etc. please let us know right away so we can get it corrected before the next payment.

This nomination list is the only reminder you will receive about upcoming payments.

Sustaining payments MUST be postmarked by August 15, 2021.

Would you like money to help with your college tuition? OQHRA has a scholarship for youth that want to have a career in the horse industry. Applications are due Oct. 1st. Follow the link to fill out the online application or print it out and mail it in.

Please pass this along to someone you might know that is working towards a career in the horse industry.

It's now restricted to members??